Science Thursday is where we test out new recipes and sell them as a one-time only, special dessert.  We pair each of these recipes with a random charity and donate a portion of the profits from every serving we sell.  We then post the recipes here for anyone that might be interested. 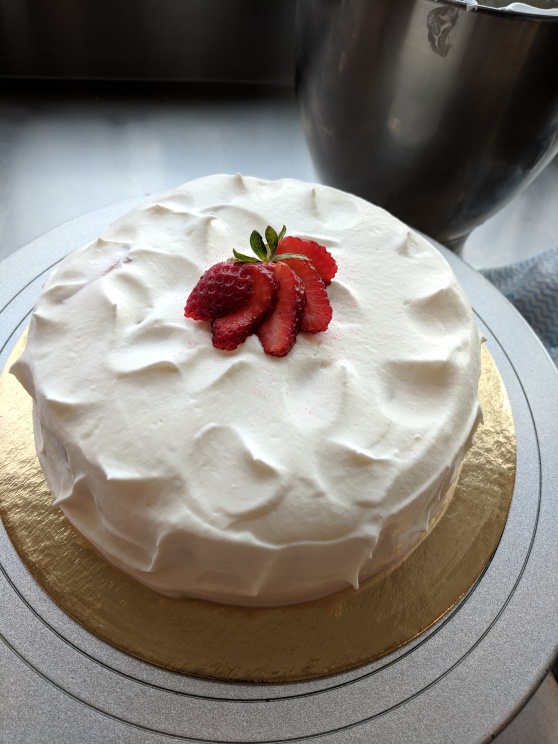 A trifle is a British dessert of sponge cake covered with layers of custard, jelly and cream.  What I’ve posted below isn’t a traditional trifle for a few reasons.  First, instead of using custard and jelly I’ve used rhubarb curd (a kind of fruit custard) and strawberries.  Second, it isn’t layered.  I opted to cut the cake into small pieces and toss it in the curd so that it can be formed into a cake shape.  I learned this method at a fabulous bakery I used to work at and I chose it for this recipe mostly because it makes my life easier.  If the desserts are free standing and cake shaped, not layered in bowl, I can package them up in our normal boxes.  If you choose to make this recipe at home, you can choose your own adventure.  If you have a beautiful trifle bowl you can use the traditional method and layer cake, curd, berries and cream.  If you want something that looks more like a cake and can sit on a plate, follow the method below.

This is a recipe with many steps.  Sorry.  I’m not going to lie, the next Science Thursday is a fairly convoluted recipe as well.  I will endeavor to find some easier things to make after that, but I make no promises.

First up, you’ve got to make angel food cake.

Angel food cake is not my friend.  One of my secret weaknesses in the kitchen is recipes that are leavened with the power of whipped eggs.  You’ve got to whip them just so or the whole thing self destructs.  One of the motivations for Science Thursdays and our new feature recipes is to force myself to improve where I need to.  My success with angel food cake has been mixed.  I believe this is mostly because I do not currently own any tube pans that are not non-stick.  Angel food cake rises in part by climbing the sides of the pan it is baking in.  If you have a non-stick pan your poor cake batter has no place to cling to and fails its little climb.  The end result is what I’ve been calling cherub food cake.  It’s still delightful and quite heavenly, but a bit more short and pudgy than proper angel food cake.  The nice thing about this recipe is that you are dressing the cake in many other layers of delicious things, so no one will notice if you don’t quite master your angel food cake. 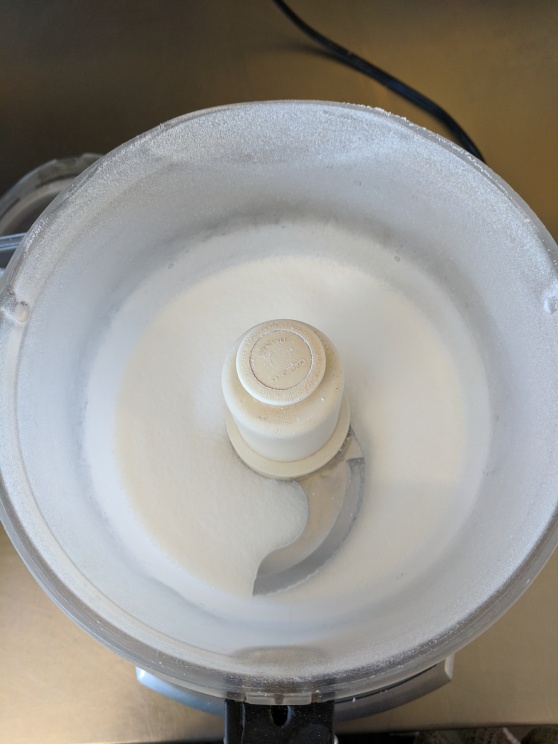 Place the granulated sugar in a food processor and give it a whirl until a nice fine consistency.

Set ½ cup of the granulated sugar aside.

Take the remaining ¼ cup and add the pastry flour, icing sugar, and salt and place them back in the food processor to blend them together.

Put your egg white in the bowl of a stand mixer and whip on a medium high setting until they are frothy. Add the cream of tartar and continue to whip until foamy.  Slowly add the ½ cup sugar in 2-3 Tbl spoon increments waiting 30 seconds between each addition.

Whip the egg white mixture until it has soft peaks. 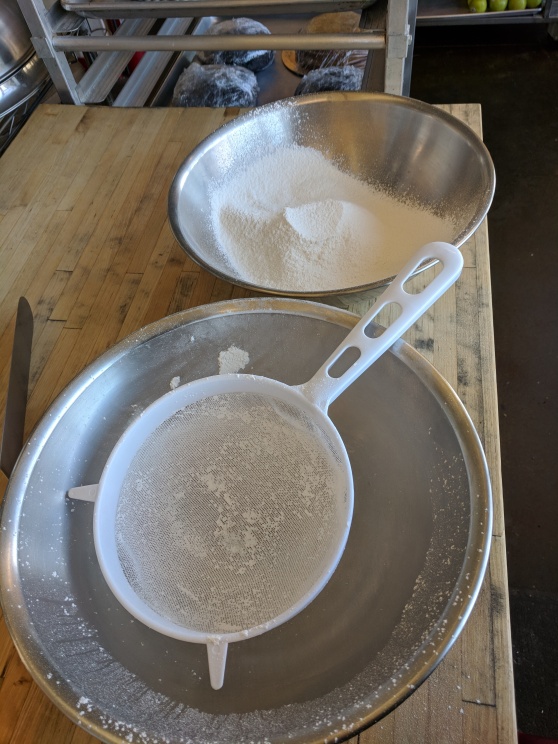 While your eggs are whipping sift your flour mixture three times. 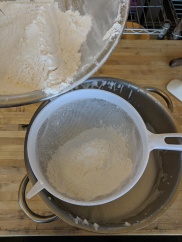 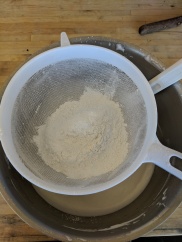 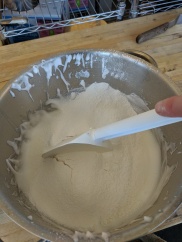 Sift one third of the flour mixture into the egg white mixture and gently fold it in. Repeat with the remaining flour in two additions.

Pour the batter into a tube pan that does not have a non stick coating and bake at 350 for 30 minutes.

I love making fruit curds, but I understand why people hate them.  For me its one of the few jobs I have where I am forced to stand still and do next to nothing.  Whisking curd as it cooks is like a mini break, I get to drink coffee with my free hand and watch the birds.  The lesson here is not to be impatient with your curd.  It will cook in the time it takes to cook, relax and enjoy it. 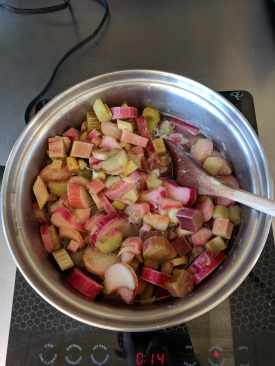 Stew the rhubarb, ¼ cup of the sugar and the water until the rhubarb is soft 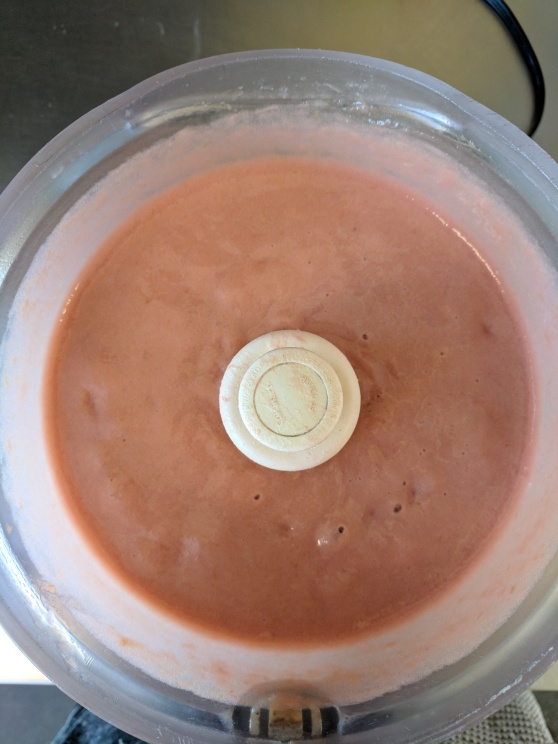 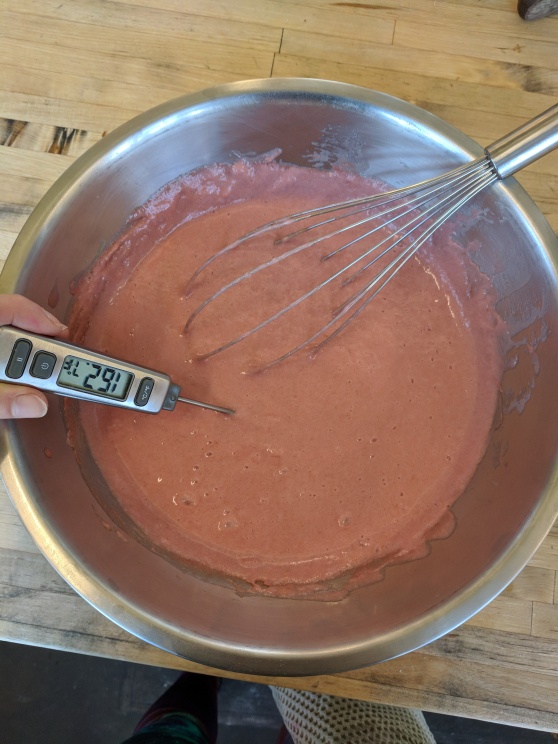 Put the rhubarb puree in a heat proof bowl and whisk in the eggs and remaining sugar.  Place the bowl over a pot of boiling water and heat while stirring constantly until your curd reaches a temperature of 160.

Remove from heat and stir in the butter.

One serving of rhubarb curd 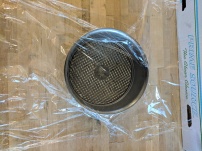 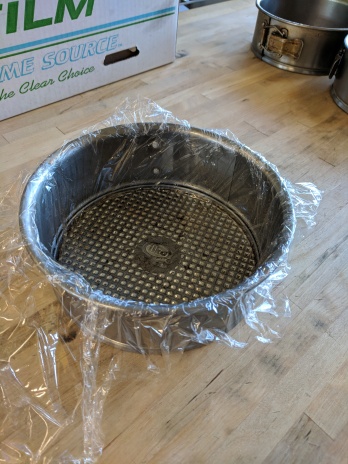 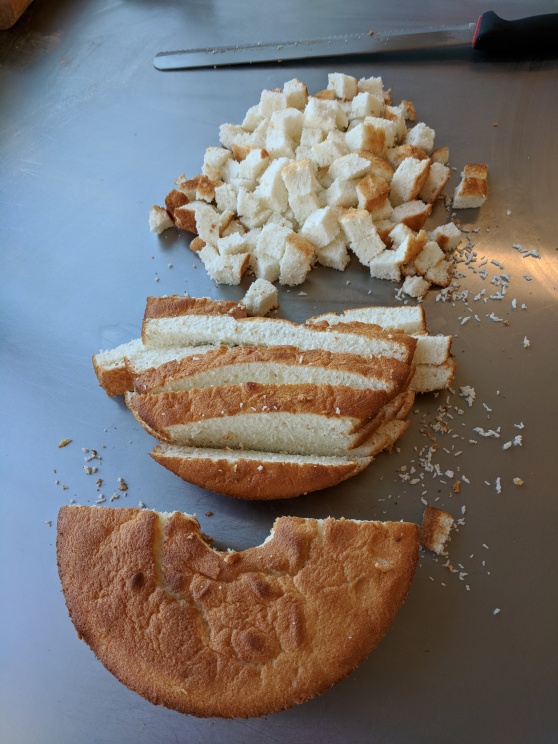 Cut the angel food cake into dice sized cubes and toss them in the rhubarb curd until they are thoroughly coated. 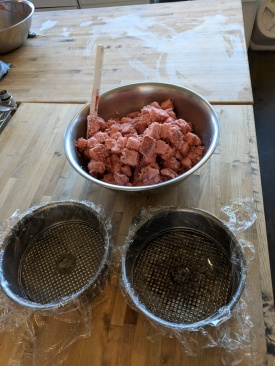 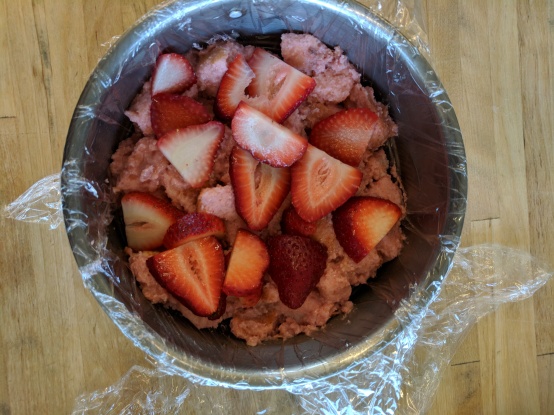 Scoop half of the cake curd mixture into the prepared pan and press it into an even layer. Cover this with 3/4 of your sliced berries and then press the remaining cake mixture over the berries.   Cover and allow to set in fridge for a few hours or over night.

Place the cream, Grande Marnier, and sugar in the bowl of a stand mixer and whip on medium high speed until soft peaks appear.

Invert the pan onto your plate, release the spring form and remove the layer of saran wrap.  Place the remaining berries on top of the cake and frost it with the whipped cream and garnish with berries.

Serve immediately or store in a fridge right until you are ready to eat it.